The spirit of Greenham rises again

Lynne Walsh chats to ‘Greenham woman’ SUE LENT about the 40th anniversary of the groundbreaking anti-nuclear action, and women’s recreation today of the legendary march from Cardiff to the Berkshire missile base

AHAPPY band of formidable women are going for a walk together over the next week: the 120 miles from Cardiff city centre to Greenham Common.

They’re aiming to follow the route set 40 years ago by trailblazers, anti-nuclear campaigners who resolved to take on the might of the US and British governments.

The US government wanted to site its cruise missiles on British soil, and in 1980 the British defence secretary Francis Pym told the Commons that RAF Greenham Common would be the main operating base.

His speech from the time sounded the alarm of a “Soviet threat” while reassuring that he was having an “information folder” prepared, to be sent to the councils in areas affected — the public could ask to read it. The missiles would be brought to the base in late 1983.

In Wales, Women for Life on Earth, formed by Ann Pettitt and friends, had not fallen for this appeasement.

By the summer of 1981, their strategy was firm: they would march to the RAF site at Newbury in Berkshire, winning media coverage and alerting the public to the real threat — that of nuclear weapons. 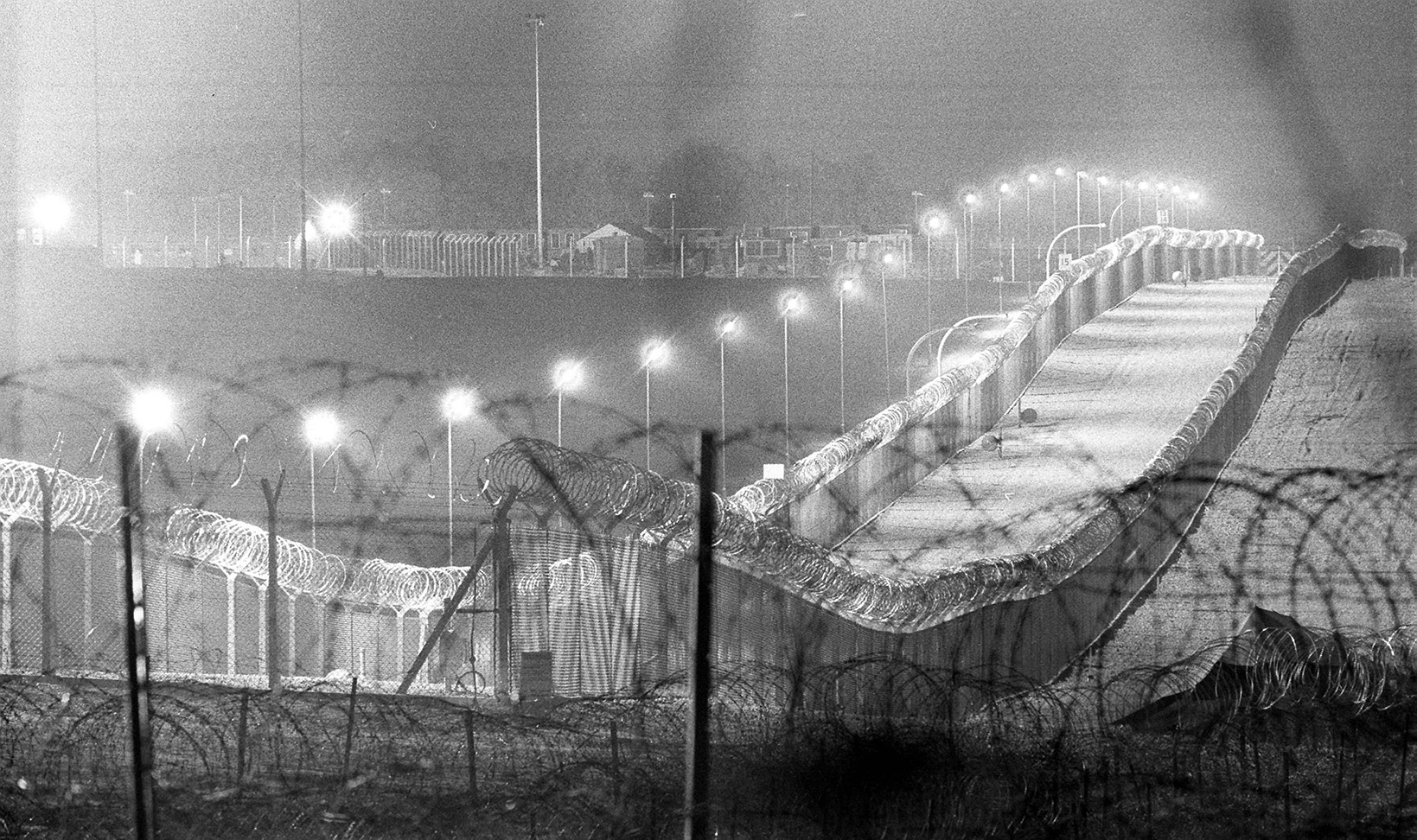 The 40th anniversary march, organised by theatre and storytelling charity Scary Little Girls, will include some who were there the first time.

Sue Lent, now a Labour city councillor in Cardiff, was then a mother of a one-year-old boy, Chris.

She plans to do the first leg of the commemoration journey — Cardiff to Newport — and a later stage, then to be in Newbury for the culminating events. 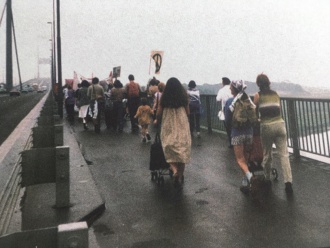 Crossing the Severn Bridge. Sue is with long hair pushing Chris in the buggy

“In 1981, I just planned to do the start. I was pushing Chris in the buggy. By the time we got to Newport, I’d decided to do the whole thing.”

Having been involved with the Campaign for Nuclear Disarmament (CND), and read about the missiles threat in the Guardian, Lent felt she should commit to as much action as she could manage.

“During that first day, I didn’t know what to expect. I didn’t really know any other women — just one from Cardiff and she wasn’t going to do the whole march.

“I’d done a lot of stuff on Troops Out of Ireland, and anti-racist demonstrations where the National Front had turned up — but I hadn’t done all that as a mother with a baby with me! 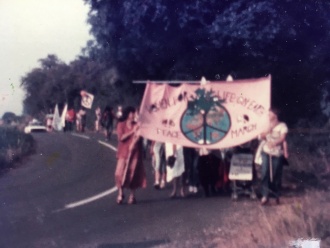 “My impetus for going on the march was having a child, and thinking about the future. What made me go on the whole thing was that it was a comfortable place to be as a woman with a baby. Ann [Pettitt] came round and asked who was going on to Greenham, and I wasn’t sure; she said I’d be well looked after.

“I got the bus back to Cardiff, packed, and my then husband John dropped me back in Newport.”

That pivotal moment, with a life-changing decision based on political nous and the faith in other women to lend support, was to be the bedrock of the campaign to come.

Hundreds of similar decisions would follow, as the encampment grew in number and in power.

The “Greenham Women” were to be iconic, involved in the biggest female-led action since the suffragettes demanded the vote. It all started that day they walked out of Cardiff.

Lent picks up the story from that week in 1981: “We decided that when we got there, four women would chain themselves to railings. There was a plan to ask for a meeting with a commander of the base, and a letter was handed in; I don’t think there was ever a response.

“But then people stayed — they had sleeping bags with them, and a few tents, so they started to set up camp. And you know — psychologically — you’ve spent 10 days with people; there’s a reluctance to go back to what you were doing before.”

She stayed, with baby Chris, with friends who lived locally, for about three days.

“The next event for me was the big CND march at the end of October. There was the walk from Greenham to Hyde Park, and we were told that Ann could speak but for only two minutes — well, she didn’t stick to that! She rallied people, and it grew from there.”

There is now a canon of work on this historical event, including Ann Pettitt’s book, Walking to Greenham, published in 2006, for the 25th anniversary, by Honno Press.

But media coverage did not come immediately in 1981.

Says Lent: “HTV and BBC Wales covered it, but we didn’t get any national publicity then.

“On the march, the organisers were constantly making phone calls from phoneboxes trying to get coverage — no internet or social media then!”

As more supporters flocked to the camp, initially designated women-only, there were headline-grabbing actions.

Many of us will recall celebrating when a group of women danced around the silos, on New Year’s Eve 1982.

Lent admits there was sometimes discord at the various camps around the base, “though I tend not to dwell on that. They were very organised, because women will do that in a collective. I think women are less hierarchical, more practical; they help each other a lot more.”

My own involvement was slight, confined to taking in supplies on a few day visits. I recall the efficiency and care taken in distribution, by women with the skills of experienced “quartermasters.”

We usually saw only police rather than soldiers; one officer told me he thought we were “unnatural.”

Decades later, I interviewed some squaddies in Hereford. One had been at the base, and had haunting memories, asking me: “What’s that sound called — that the women made, in the night?” referring to the ululating, that cross between a funereal wail and a warcry.

“It freaked us out,” said the battle-scarred bruiser.

The 40th commemoration sees the march culminating in events at the base itself, now common land after the last missiles were removed in 1991.

“We need to stand on the shoulders of our foremothers and carry their campaigns for peace and justice forward.”

There’s plenty of campaign work to do, with legislation imminent, designed to clamp down on protest, and government plans for Trident, which have come in for a volley of criticism recently, notably from Lord McDonald, permanent secretary at the Foreign Office until autumn 2020.

He claims that Britain will have stepped back from its obligations under the nuclear Non-Proliferation Treaty if it goes ahead with plans to increase its nuclear arsenal.

Boris Johnson is lifting the cap on the number of Trident nuclear warheads it can stockpile by more than 40 per cent, taking that limit from 180 to 260 warheads.

This weighs heavily on the minds of “Greenham women” and their sisters. There are other campaigns, too, and diaries stuffed with meetings and actions. But there is energy, and solidarity.

Sue Lent again: “I see what’s happening now with women’s rights as a revival of the women’s movement. I’ve met so many amazing women, for example, with the Labour Women’s Declaration.

“In our first meeting, we found that so many have connections to Greenham — or it had inspired them and they’d gone later with their mothers. It was quite striking.

“I feel part of a wonderful movement — and I hadn’t felt that for some time. Aren’t women amazing?”

For more information about the 40th anniversary march visit greenhamwomeneverywhere.co.uk.