This time next month, council tax bill increases that average five per cent will have arrived on the doormats of millions of people. The low paid, unemployed and pensioners with fixed incomes will be among the hardest hit. But there is another group of people – the disabled – who will be hit even harder. This increase will likely push many of the most vulnerable of our citizens over the edge of an already gaping precipice that began widening following drastic reforms to the welfare system that followed the 2012 Welfare Reform Act. Further drastic cuts occurred four years later following the passing of the Welfare Reform and Work Act which, it has been estimated, will have cut nearly £28bn of social security support to 3.7m disabled people by 2018.

What film director Ken Loach described as the “conscious cruelty” of the Tory government seems to know no bounds. A few days before the May, 2015 General Election, 100 disabled people from a variety of backgrounds – ranging from nurses to actresses, academics to museum managers – signed and published a letter addressed to the British electorate – saying they believe that “if the Conservative Party was to form the next government, either our own lives or the lives of others in our community would be in profound danger”. The letter continued: “Disabled people have been hit by spending cuts nine times harder than the general population, and those needing social care have been hit 19 times harder…Now we read of £12 billion more cuts.”

This ought to have been the cause of massive, sustained outrage and disgust, and should certainly have been sufficient enough to have brought down not only the minister responsible at the time, Iain Duncan Smith but the entire Tory government. But not only were the government under Cameron re-elected but Duncan-Smith’s revised plans to transform disabled people’s lives by getting them into work ended up killing many more of them in the days, weeks and months that followed.

On August 27, 2015, Department for Work and Pensions (DWP) figures revealed that between December 2011 to February 2014, 2,650 people died after being told they should find work following a “Work Capability Assessment” (WCA). Duncan-Smith, who admitted that his department has a “duty of care” to benefit claimants, disingenuously insisted that there was no evidence of a ‘causal link’ between the WCA and the subsequent 590 recorded deaths from suicide, despite the fact that the coroner’s findings stated that all of the deaths “certainly aren’t linked to any other cause.”

Not only did the Conservative government try to cover-up the figures, but have continued with a policy strategy that has resulted in the killing of hundreds or possibly thousands more people after they have been deemed “fit for work.”

Such a policy can reasonably be described as ‘chequebook euthanasia’ in as much as it is clear that the intention to kill is deliberate, conscious and systematic. While researching for the film I, Daniel Blake, Ken Loach’s script-writer, Paul Laverty referred to a statement made to him by a civil servant who described the victims of this chequebook euthanasia as “low-lying fruit”, in other words, the easy targets. Several whistleblowers, he met anonymously said they were “humiliated how they were forced to treat the public.”

While all decent people rightly regard this ‘involuntary euthanasia’ strategy to be deeply shocking, it should be noted that it is not a new one. Years before moving towards explicit racial genocide, the Nazis developed the notion of ‘useless mouths’ or ‘life unworthy of life’ to justify its killing of ‘undesirables’ who like the Tories they regarded as a ‘drain on society’ whose value was measured solely in terms of their perceived negative impact on the ‘taxpayer’.

These ideas are a variant of nineteenth century ‘Social Darwinism’ and eugenicist theories, which adapted Darwin’s notion of the survival of the fittest to describe relationships within society or between nations and races as a perpetual evolutionary struggle in which the supposedly weaker or defective elements were weeded out by the strongest and the ‘fittest’ by natural selection.

Many people might opine that to compare modern day Tories to Nazi’s is far-fetched. While they may have a point, it’s nevertheless undeniable that similar disturbing parallels and types of trends that blinded Germans to the potential of Adolf Hitler can be found in contemporary society. For example, as is the case with the Conservative government, Nazi Germany, over time, created – through a strategy of divide and rule – a climate in which the marginalisation and the dehumanisation of targeted minorities were blamed for societies ills.

What is also undeniable, is that a universal social security system that has at its basis the proposals set out in the Beveridge Report (1942), has been in steady retreat from the mid- 1970s with a greater emphasis on means-testing and exclusion. The Conservative government under David Cameron, and now Theresa May, seem to be taking this ethos several stages further with their Dickensian ‘back to the future’ strategy not experienced since the Poor Law of the 19th century and before.

Emboldened by what some perceive as a weakness in the Labour opposition to bring the Tories to account, the May government appears to be testing the limits by which civilised society is measured. It is now claimed that around 160,000 disabled people will be stripped of their basic humanity as a result of the government’s attempt to undermine the basis of legal rulings by which entitlements to payments are made.

“This is an unprecedented attempt to subvert an independent tribunal judgment by a government with contempt for judicial process….This is a step too far, even for this Tory government. Labour will stand with disabled people, who have already borne the brunt of seven years of austerity, in fighting this injustice.”

Fine words. But is this merely an illustration of ‘hot air’ from the shadow work and pensions secretary? The actions of prominent Labour figures leading up to Abraham’s appointment would tend to suggest so. The acting Labour leader prior to the election of Jeremy Corbyn, Harriet Harman, for example, supported the principle of the Tory welfare cap.

But arguably most significant of all, is that as Secretary of State for Work and Pensions under the previous Labour government, Yvette Cooper had drawn up plans that would almost certainly have met with the approval of Iain Duncan-Smith.

This is the relevant part of an article from April 13, 2010, implicating Cooper’s policy outlook with that of the Tories she supposedly despises:

“Tens of thousands of claimants facing losing their benefit on review, or on being transferred from incapacity benefit, as plans to make the employment and support allowance (ESA) medical much harder to pass are approved by the secretary of state for work and pensions, Yvette Cooper.

The shock plans for ‘simplifying’ the work capability assessment, drawn up by a DWP working group, include docking points from amputees who can lift and carry with their stumps. Claimants with speech problems who can write a sign saying, for example, ‘The office is on fire!’ will score no points for speech and deaf claimants who can read the sign will lose all their points for hearing.

Meanwhile, for ‘health and safety reasons’ all points scored for problems with bending and kneeling are to be abolished and claimants who have difficulty walking can be assessed using imaginary wheelchairs.

Claimants who have difficulty standing for any length of time will, under the plans, also have to show they have equal difficulty sitting, and vice versa, in order to score any points. And no matter how bad their problems with standing and sitting, they will not score enough points to be awarded ESA.

In addition, almost half of the 41 mental health descriptors for which points can be scored are being removed from the new ‘simpler’ test, greatly reducing the chances of being found incapable of work due to such things as poor memory, confusion, depression and anxiety.

There are some improvements to the test under the plans, including exemptions for people likely to be starting chemotherapy and more mental health grounds for being admitted to the support group. But the changes are overwhelmingly about pushing tens of thousands more people onto JSA.

If all this sounds like a sick and rather belated April Fools joke to you, we’re not surprised.  But the proposals are genuine and have already been officially agreed by Yvette Cooper, the Secretary of State for Work and Pensions. They have not yet been passed into law, but given that both Labour and the Conservatives seem intent on driving as many people as possible off incapacity related benefits, they are likely to be pursued by whichever party wins the election…..”

If this wasn’t bad enough, it should also be noted for all those who were not paying attention at the time, that during Cooper’s challenge for the Labour leadership, she accepted an undisclosed sum of £75,000 from businessman Dan Jarvis which contributed to the New Labour enthusiasts campaign.

The mainstream media didn’t pay much attention to that scandal at the time, nor did they highlight Coopers subsequent hypocrisy and nastiness. Following what columnist Fraser Nelson described tellingly as “the terrifying victory of Jeremy Corbyn’s mass movement” at staving off the coup attempt against him, the Corbyn critic and New Labour MP for Normanton, Ponefract, Castleford and Nottingley tweeted the following:

Congratulations @jeremycorbyn re-elected today. Now the work starts to hold everyone together, build support across country & take Tories on

Clearly, a day is a long time for liars to avoid tripping over their own pronouncements. Less than 48 hours after her insincere message on Twitter, the Blairite MP engaged in a media publicity stunt intended to draw a deeper wedge between the PLP and the membership.

Cooper’s crude ‘politics of identity’ strategy was to infer that shadow chancellor John McDonnell was a misogynist for his use of emotionally charged language in defending the “appalling” treatment of disabled people by the last government.

The context in which McDonnell made his remark was set against a backdrop in which former Tory secretary of state for work and pensions, Esther McVey, planned to cut the benefits of more than 300,000 disabled people. That Cooper rushed to the defence of a Tory who presided over some of the most wicked policies of arguably the most reactionary and brutal right-wing government in living memory, is extremely revealing.

What was also revealing was the media’s obvious double-standards. A few days prior to their reporting of McDonnell’s comment, Guardian journalist Nicholas Lezard called for the crowdfunded assassination of Corbyn. Needless to say, there was no media outrage at this suggestion. 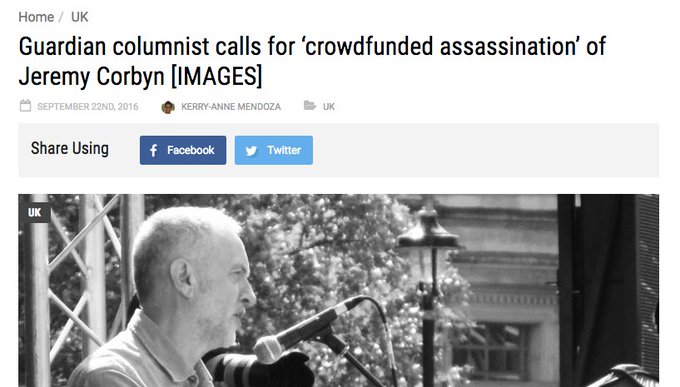 Selective outrage is what many people have come to expect from a partisan anti-Corbyn media. In May 2015, independent journalist, Mike Sivier reported on Cooper’s criticism of those “using stigmatising language about benefit claimants”.

But as the article highlighted above illustrates, while in office as Labour’s secretary of state for work and pensions, Cooper had drawn up plans that were as brutal as any Tory.

Indeed, the policy plans she drew up were subsequently adopted by the Coalition government under the tutelage of Esther McVey. In policy terms, it would thus appear Cooper has more in common with McVey than she does with McDonnell. This and her disdain towards both Corbyn and McDonnell and the mass membership they represent explains her outburst. She was not motivated by sisterly love.

Cooper’s deeds and words are yet another illustration as to the extent to which the ideological consensus between the New Labour hierarchy as represented by the Parliamentary Labour Party (PLP) on the one hand, and the ruling Tory establishment on the other, is structurally embedded within a dysfunctional system of state power that is no longer fit for purpose.